No More Heroes and No More Heroes 2: Desperate Struggle launch on Steam today, allowing PC gamers to go hands on with these cult classics.

It’s something to celebrated, what with No More Heroes 3 on the way (though that may be a Nintendo Switch exclusive). Plus, they’re both genuinely entertaining games, placing players in control of nerdy assassin Travis Touchdown. As ports go, however, they’re both extremely basic.

Boot either game and you’ll find no graphics options within their menus. Instead, you configure them via a launcher. That’s not particularly out of the ordinary, especially for ports such as these, but the lack of options available within the launcher is. In terms of graphics, for example, all you can do is toggle full screen on and off and select which form of antialiasing you’d like to use. In other tabs, you’re able to toggle subtitles on and off, enable vibration, invert the X & Y axis, and that’s about it.

It has to be said that not even being able to choose your resolution is extremely disappointing. As is not being able to change the anisotropic filtering setting, or V-Sync. The saving grace is that the art style employed by both No More Heroes and its sequel at least ensure the games remain visually appealing, even if they’re a little rough around the edges these days. The worst thing about them are their low quality videos, which stick out like a sore thumb.

Being the older game of the two, released on the Wii way back in 2007, No More Heroes feels the most antiquated, with its camera getting in the way of the action at times. Also released on Wii, but some three years later, No More Heroes 2: Desperate Struggle tightens up the combat and camera somewhat, leading to a more enjoyable experience overall. Though I perhaps should mention that there’s no mouse and keyboard support – you’ll need a controller to play. 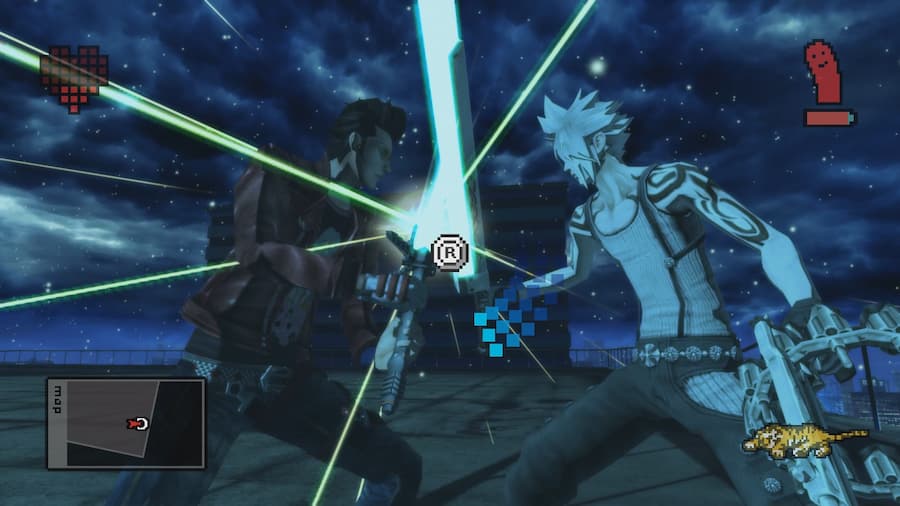 Both games find Travis Touchdown attempting to become the number one ranked assassin on the United Assassin Association leaderboards. In that pursuit, he’ll have to track down and engage in combat with the assassins ranked higher than him. Along the way, there are a wealth of side jobs to undertake, and retro-styled minigames to complete. The biggest difference between the two is that while the first No More Heroes has an overworld to be explored, Desperate Struggle doesn’t. It does, however, have multiple beam Katanas for Travis for use, and he can quickly switch between them in battle.

If you’ve never played No More Heroes or No More heroes 2: Desperate Struggle before, these ports will allow you to enjoy them, but you won’t be wowed by the job done bringing them to PC. They both look and play better than ever, no doubt, but it’s shame more hasn’t been done to bring them a little up to date. Needless to say, if you’re fan who’s already bought them both on Nintendo Switch recently, there’s not much to be gained here.

Resurfacing Serums That Will Truly Transform Your Skin