Open Country‘s animal hunting elements don’t appeal to me, but the idea of being one with nature, free to explore the great outdoors? Yes please.

Now, people who go hunt live animals in real life can go jump off the planet. But in a videogame – especially one like Open Country, where hunting isn’t presented as a sport but as a means of survival – it’s slightly different. I feel mostly okay about shooting at a digital bear because it’s about to rip me in half. But shooting a deer majestically grazing in a field, doing harm to no-one? Nope. There’s no need.

To be fair, I’ve mostly survived in Open Country on berries and mushrooms I’ve foraged from the forest floor. I did once eat a bit of raw wolf meat when I was on death’s door via starvation, however. I’d killed the wolf in self-defence, so it felt rude not to pick up its flesh and stuff it in my backpack for later, just in case. Thankfully, berries and mushrooms are usually in abundance, and there’s no risk of a berry charging at me, teeth bared, as I pluck it from its bush. The fact that any one berry bush will only yield one berry at a time is neither here or there. Open Country 1, Realism 0.

For a game that tries hard to provide a realistic outdoor survival simulator, there are a lot of elements that fall wildly foul of actual world logic. I got parasites simply by putting river water in my flask, for one. Nope, didn’t have to drink it first. Simply by collecting it, those parasites entered my body, rendering me sick and prone to drop dead at any given moment for about three days straight. The game had previously told me that still water was fine to drink as long as I boiled it first, so I figured I could collect it in my flask, then go light a fire to sterilise it. Clearly I did something wrong during the process.

There’s also the fact that there’s very little point in treating a sprained ankle. Jump too far off a ledge or run haphazardly down a steep banking, and you’re likely going to get a sprain. You can treat it, but that means using resources – and actually having the resources to use in the first place. But a sprain goes away on its own in about a day, and does absolutely nothing to hinder you, other than preventing you from sprinting. And considering your character has less stamina than Alan Wake, sprinting for around five seconds before depleting their entire stamina reserve, it’s hardly a great loss. 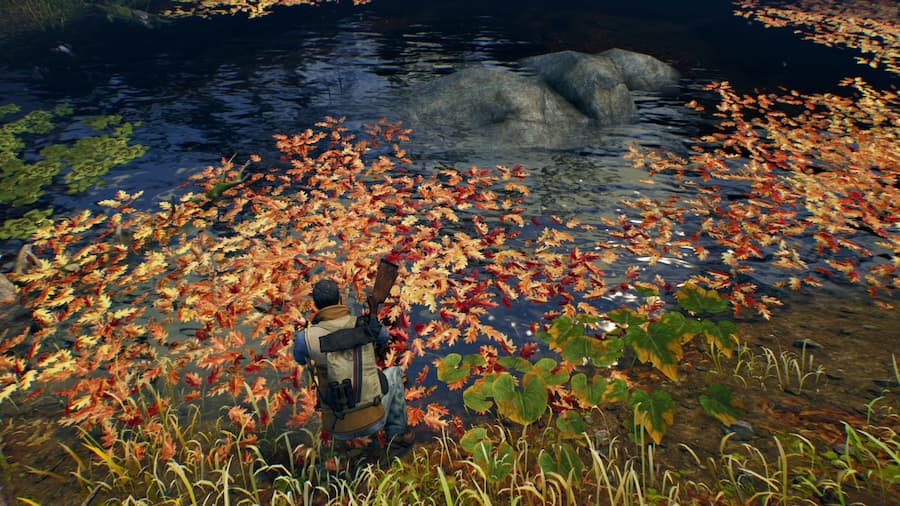 Oh, and let’s not forget that the whole reason you’re out in the wilderness, running errands and doing the hard work, is because a local innkeeper told you that he’d put a roof over your head if you helped him out. Does he put a roof over your head? HE DOES NOT. You might be starving, dehydrated and on the brink of collapsing from exhaustion but Gary behind the bar at the Snowridge Lodge does not care. Back to find berries and a source of fresh running water you must go, because Gary sure as heck won’t fill up your flask behind the bar. And don’t think about laying down for a nap on one of his tables, either.

Silliness aside, there is something enjoyable about Open Country. Its concept is a solid one; being out in nature, with only a vague objective to work towards, provides a real sense of freedom. Spending three days tracking a sick elk that needed putting down did get tiresome, but coming across fresh footprints and eventually finding the animal felt like a victory. Maintaining your own wellbeing by keeping track of your hunger, thirst and tiredness can feel like a chore, but there’s a real sense of pride in creating your own camp and fire, and cooking your own food that’ll put you back in good health. 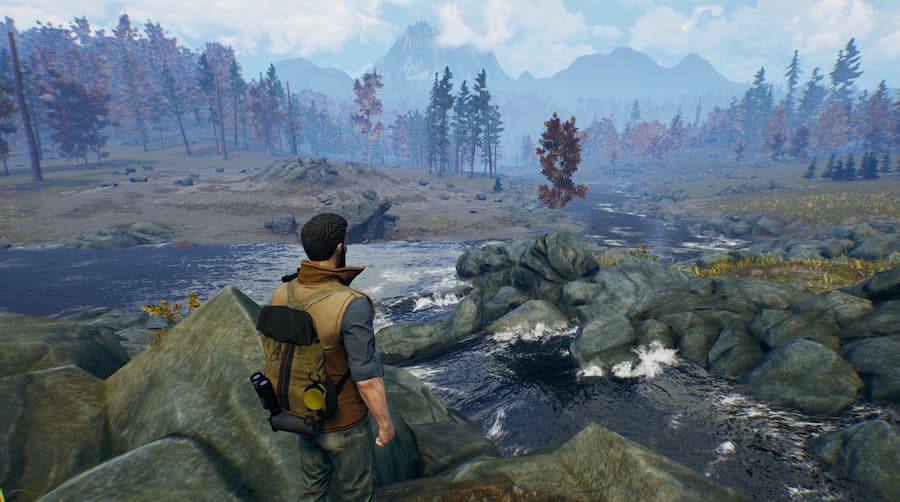 It’s just a shame that, for the most part, Open Country is very rough around the edges. It’s almost a good game, but it’s not quite there. It almost looks nice, but it’s not quite there. If it could render at a higher resolution, Open Country‘s environments would be pleasing to the eye, but as they are right now they’re blurry and underwhelming. A lack of real guidance makes it difficult to get off the ground running with the game, too. I wasn’t told about the flask of water I carry on my person until I was mere seconds away from dying of dehydration, for instance. There are some basic tooltip tutorials when you first start playing, but many of the game’s systems you’ll simply have to discover for yourself.

Then there’s the fact it’s riddled with bugs. Be prepared for NPCs stuck in the floor of the Snowridge Lodge. Or animals that suddenly stop pursuing you because they’re now trapped in a rock. Or a duck floating ten feet above the lake it’s supposed to be paddling in. They’re not game-breaking bugs, but they do break your immersion in the game.

Filled with glitches, fallible logic and a list of problems as long as my arm, I absolutely cannot call Open Country a good game. But despite its rough edges, there’s something to be said about the freedom it provides players. Exploring the vast wilderness, being fully responsible for your own survival, can be exhilarating. Just don’t expect a polished experience, and you won’t be too disappointed.

This review of Open Country is based on the PS4 version of the game (played on PS5), via a code provided by the publisher. It’s available on PS4, Xbox One and PC.